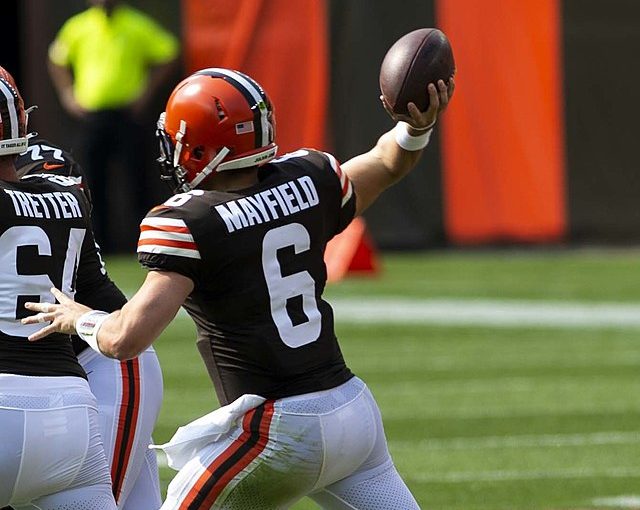 Baker Mayfield playing against the Washington Football Team in 2020

Baker Baker touchdown maker… This season we have not seen the normal amount of touchdowns from Baker. Due to several poor performances, when this was supposed to be the Brown’s year, the Browns have been left at the bottom of the AFC North.

It is hard to justify the poor performance of the Browns this year when we have one of the best ranked defenses in the league, and some of the best running backs as well.

When the Browns played the Packers on Christmas day the problem became the most evident it has been in years when Baker threw four interceptions.

Christmas day was not the only incident of Baker’s poor performance. Losing to the Steelers the following week, and even when he did not monopolize on Lamar Jackson’s four interceptions, Baker is not bringing home the wins the Brown’s desperately needed to clinch a playoff spot.

But with Baker getting so much praise last year when the Browns made the playoffs for the first time in decades, there have obviously been some changes.

To start, this is Baker’s contract year so if he does not play exceptionally well, he may not get resigned, which is the approaching reality for him. This daunting future pressured him to play through many near season ending injuries leading to his increasingly poor performances.

With a broken foot and injured knee it makes it hard for Baker to be a mobile quarterback, leading to many sacks or panicked plays (resulting in loss of downs or interceptions). As well as an injured left shoulder, which happened earlier this season, it is hard to believe he is still playing at all.

Even with Baker’s plethora of injuries it is hard to justify performances this poor, with a team that is this good, so what should the Brown’s solution be?

Baker should not be fired, but I can not justify Baker still remaining our franchise starting quarterback at least for next year. Baker should ride the bench for a year while coaches gauge his ability.

The only issue is who would be the Brown’s main quarterback and there are two great prospects I can see that would slip right into the Brown’s team dynamic. Either Mitch Tribisky, quarterback number two for the Buffalo Bills, or Jimmy Garapolo, starting quarterback for the San Francisco 49ers.

In the 2020-2021 season last year Mitch Tribisky threw zero interceptions and took the Bears to a playoff appearance. I feel that his play calling dynamic would be similar to the Browns if he were to make a transition.

The Bears receiving core at the time of Darnell Mooney and Allen Robinson, has a very similar skill base as current Browns receiving core of Jarvis Landrey, and Dovontee Peoples-Jones. The only difference would be the transition to a two back team (Nick Chubb and Kareem Hunt) from a singular back team (David Montgomery).

The Bears in the 2020 season recorded 1993 yards which is not comparable to the Browns near 3000, which is the only new dynamic Tribisky would have to adapt to when joining the Browns.

Trubisky is a great quarterback and deserves a chance to lead a team again. The only reason he was no longer on the Bears was because he was not producing the direct results they wanted. Given the right talent like the Brown’s and their coaching staff currently have, he could fully maximize on that potential, if Baker continually proves he is unfit for that role.

Another potential quarterback pick up/trade would be for Jimmy Garapollo, with the early draft of Trey Lance, one can presume the 49ers are looking for a new QB.

I believe Garapollo would be a great fit in the current Brown’s Dynamic. The 49ers have one of the deepest running back cores in the NFL so Garapolo knows how to work with multiple running backs.

Garapollo’s utilization of tight ends would fit very well with the Brown’s current dynamic with dual tight ends (Austin Hooper and David Ninjoku). Garapollo is also a very underrated passing QB, with over 3000 passing yards, even after being injured for part of the season.

There are many other QB’s in the NFL that may go to free agency such as Russel Wilson, which I feel just would not fit as well with the Browns dynamic.

Russel Wilson is known for his great passing plays, but is also known for his reluctance to run the ball. Unlike the Brown’s who are constantly rushing, and are known as one of the greatest rushing teams in the NFL currently. His lack of run plays and surplus of passes simply would not allow him to fit with the Brown’s current play calling technique.

Overall Baker should still be in the Dawg pound, but the Brown’s should consider other options since there is greater underutilized talent in the NFL that should be leading the Browns to a Superbowl.