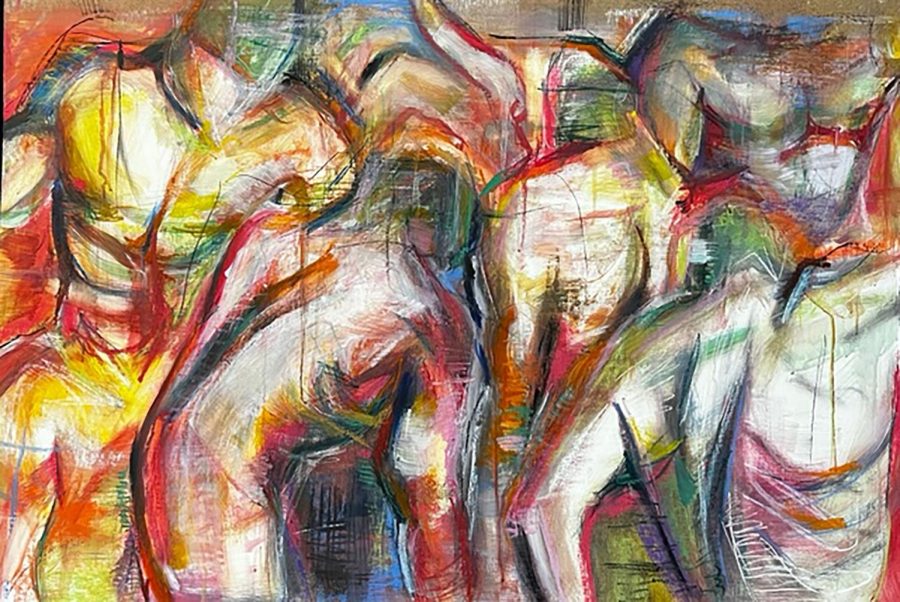 Describe the piece from a visual standpoint

“Folding Bodies” is a large mix between a painting and drawing with various impressions of the male body spanning across a horizontal canvas.

What inspired you to make this piece?

“Folding Bodies” was frankly created as a kind of ‘exposure therapy’ for me and my aversion to men. It may seem laughable, as I also laughed, but deep down I knew that it was a real and terrifying motif in my mind that needed to be coped with. The composition was inspired by the images that rolled through my head when the fear peaked, where contouring and folding bodies drowned my mind’s eye. I wanted to face those images with time and reflection through artwork.

What is the purpose and/or message of this piece?

“Folding Bodies” has the purpose of conveying the visions that I’ve had as a manner of leaving them behind on a canvas. There was not entirely a purpose for the artwork for the audience, it was mostly as a form of therapy for myself.

What techniques and methods did you use to create this?

For the “Folding Bodies” drawing / painting, I referenced mostly my boyfriend’s body, but also used references of a model that we had in art class to draw the male subjects in the drawing / painting hybrid. I used a very expressive method of application, being rough with the canvas and my brushes with brisk movements. I used a combination of acrylic paint, chalk and oil pastels. Typically chalk and oil pastels aren’t mixed together as that can lead to adverse textures, but I enjoyed the look of separation and the texture that was produced in the artwork. The acrylic paint was more-so the under-painting for the drawing.