On Feb. 24, 2022, the world watched with nervous breaths as Russian President Vladimir Putin announced a Special Military Operation in Ukraine. Minutes later airstrikes and missiles hit major Ukrainian cities, and within a week, over 100,000 Russian soldiers would enter Ukraine, marking the largest war in Europe since World War II.

Within a month the war has caused an estimated 10,000 – 30,000 casualties, including over 1,100 confirmed civilian deaths. Over four million Ukrainian refugees have fled the country, mainly women, elderly  and children, creating one of the largest humanitarian crises in the last 80 years. War reporters and journalists flocked to the country, which, combined with video and testimonials posted by Ukrainians, has made the invasion the most well documented conflict in history.

But, even so, war doesn’t wait for cameras, and what we see on the news is just a snapshot of what’s really happening, not only in Ukraine, but in the world as a whole.

Background to the Conflict in Ukraine

A fully independent Ukraine emerged only late in the 20th century, after long periods of successive domination by Poland–Lithuania, Russia and the Union of Soviet Socialist Republics (U.S.S.R.).

Ukraine had experienced a brief period of independence in 1918– 1920, but portions of western Ukraine were ruled by Poland, Romania and Czechoslovakia in the period between the two World Wars, and Ukraine thereafter became part of the Soviet Union as the Ukrainian Soviet Socialist Republic (S.S.R.).

When the Soviet Union began to unravel in 1990–91, the legislature of the Ukrainian S.S.R. declared independence, a move that was confirmed by popular approval through a referendum.

With the dissolution of the U.S.S.R. in December 1991, Ukraine gained full independence.

The country changed its official name to Ukraine, and it helped to found the Commonwealth of Independent States (CIS), an association of countries that were formerly republics of the Soviet Union.

However, direct Russian aggression towards Ukraine is a more recent development.

In a televised speech announcing Russia’s “special military operation” in Ukraine on February 24, Russian President Vladimir Putin said the invasion was designed to stop a “genocide” perpetrated by “the Kyiv regime”  and ultimately to achieve “the demilitarization and de-Nazification of Ukraine”.

Though the claims of genocide and Nazi rule in Kyiv were transparently false, the rhetoric revealed Putin’s maximalist war aims: regime change (“de-Nazification”) and the elimination of Ukraine’s status as a sovereign state outside of Russian control (“demilitarization”).

Putin’s motivation towards an invasion is a complex story, one that emerges out of a long arc of Russo-Ukrainian relations. Ukraine and Russia have significant, deep and longstanding ties, both historically and culturally.

But these ties do not make them historically identical, as Putin has repeatedly claimed in his public rhetoric. Since the rise of the modern Ukrainian national movement in the mid to late 19th century, Russian rule in Ukraine during both the czarist and Soviet periods increasingly came to resemble that of an imperial power governing an unwilling colony, a mentality that has continued into present times.

In late 2013, Ukrainians took to the streets to protest the authoritarian and pro-Russian tilt of incumbent President Viktor Yanukovych, forcing his resignation in February of 2014. Yanukovych had fled the country and the capital had fallen into the hands of pro-European opposition parties.

As Ukrainian forces began systematically reclaiming contested territory ahead of the May 2014 presidential elections, the United States and the European Union (EU) expanded economic sanctions against an increasingly wide circle of Russian companies and individuals.

The recent events and attacks have given onlookers memories of early 2014, a conflict that began nearly 9 years ago, which saw the Russian annexation of Crimea from Ukraine, and the start of bloodshed in the east of the country, which still continues today.

Beginning in March 2021, Russian forces began deploying to the Ukrainian border in larger and larger numbers.

Putin’s nationalist rhetoric became more aggressive: In July 2021, the Russian president published a 5,000 word essay arguing that Ukrainian nationalism was a fiction, that the country was historically always part of Russia, and that a pro-Western Ukraine posed an existential threat to the Russian nation.

As a result, the general pre-invasion view was that Russia would easily win a conventional war. In early February, Chairman of the Joint Chiefs Mark Milley told members of Congress that Kyiv, the capital, could fall within 72 hours of a Russian invasion.

But that’s not how things have played out. A month into the invasion, Ukrainians still hold Kyiv. Russia has made some gains, especially in the east and south, but the consensus view among military experts is that Ukraine’s defenses will continue to hold. Recently Russian armies have withdrawn from northern Ukraine, likely ensuring the safety of the capital for the remainder of the conflict.

Throughout war, facts often get twisted and lies are perpetuated. The graphic below details some of the most widely spread lies/misinformation since the start of the conflict. 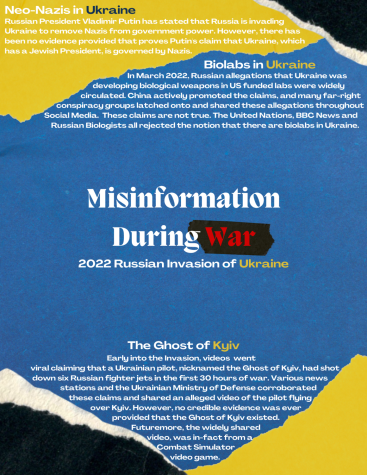 Your donation will support the student journalists of GlenOak High School. Your contribution will allow us to purchase equipment and cover our annual website hosting costs. 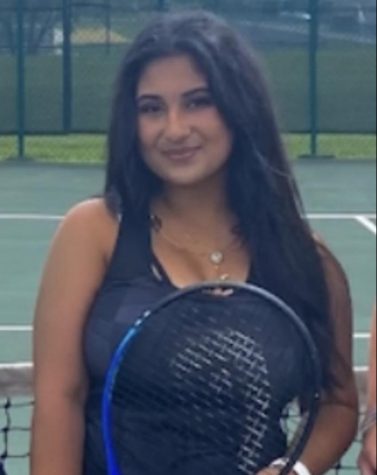 Tajouis (she/her) is a senior this year at GlenOak High School.  This is her third year on staff.  She is also a member of the tennis and lacrosse teams. ...